The recent reports by the New Vision on alleged massive criminal activity by top pastors are wanting, to say the least. For a country with a media that has been used as a pawn to desecrate the reputation of the born-again faith from time immemorable, such accounts should be taken with a pinch of salt by well-meaning individuals. 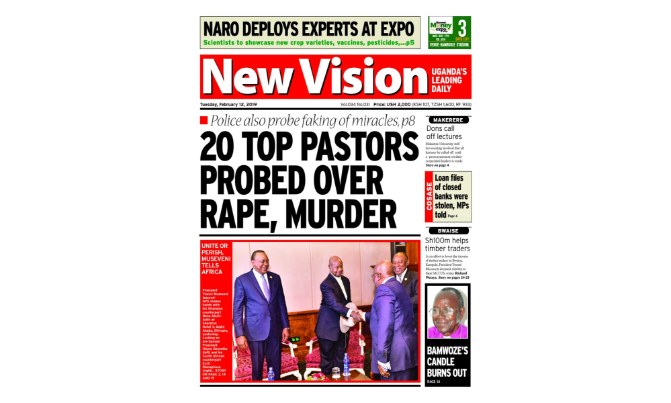 From the trail of reporting over the years, it is plain to see that there is a calculated and devious scheme to confuse and enrage the masses with such sensational reporting and hate speech; obviously with the intent to derail and set them on a path of conclusions far from the truth. This is one of the most unfortunate effects that this kind of activity will have on the masses. It is clear that the plotters of this scheme are riding on the naivety of the masses who are largely and passionately subscribed to traditional religions to estrange them to the born-again faith. In fact, it is well within their interests that mainstream religions are upheld as a much safer concept and authentic way of life, so that many will lay camp along this familiar path and never venture into the actual truth about the born-again faith.

This kind of approach is an age-old trick used to confuse and turn the masses against the truth, albeit the fact that the very solutions they crave, could be right in their midst. When the Lord Jesus walked the earth, He faced hostile elements in His day which were persistent in conjuring up falsehoods in a bid to turn the people and the State against His message. He was flimsily accused of encouraging the masses not to pay taxes, introducing practices that were against the traditions of men in His day and we see the same reaction against the ministry of the Apostles who were deeply persecuted for their message, their truth — even unto death. Generally, the world then was and still is averse to a new way that challenges the status quo.

These reports are simply designed to suffocate different perceptions of faith and form part of the build up to validate the proposed regulation of religious and faith-based organisations, and it is time the born-again church called them out for what they truly are! The supposed “urgent” regulation is in essence a facade and a dodgy plot, obviously targeted at annihilating the true Church of Christ and frankly not targeted at any of the other faiths/religions but maintaining the status quo.

What stands out though is the persistent negative interest in pastors and yet so much has been going on for centuries within other religious establishments for instance the Catholic church which has had consistent complaints lodged against it for crimes such as sodomy and defilement among other things, but this has conveniently not made it to the media as often as reports concocted about the born-again faith. This surprisingly did not even warrant the need to regulate the church then and yet at the sign of some masquerades in Pentecostal churches today, suddenly there is a convenient and critical need to regulate. This selective reporting of evils in making a case for regulation is frankly glaring.

The naked truth is that these clandestine attempts to smear born again ministers as frauds, criminals and whatnot, are a backlash against a special breed of believers, one never before seen, who are undeniably rising in power and authority; undoubtedly posing a threat to the status quo. Something about this breed of believers deeply unsettles these individuals, so much so that they will go to great lengths to unduly and unfairly use skewed communication to stifle their existence and operations.