You have probably heard about the anti-monopoly (Antitrust) laws in the United States of America which were set up to dismantle corporate business monopolies which controlled entire industries in unjust ways that prevented fair competition and denied the consumers access to options and freedom of choice when purchasing a service or a product.

The most famous was Standard Oil owned by the Rockefeller family which was dismantled into many different companies, allowing other citizens to invest in the smaller companies created to compete against each other in delivering services to the public.

Just like corporate business monopolies are created through government regulation disguised as efforts to eliminate fake businesses or fake products, religious monopolies in a nation are created through leaders and followers of large and old/traditional religious sects seeking to discriminate against new and emerging small sects which are competitively attracting converts from the traditional sects, simply by fostering an awakening to true spirituality and the experiential knowledge of the transcendent God; which the old sects have denied their followers for centuries. 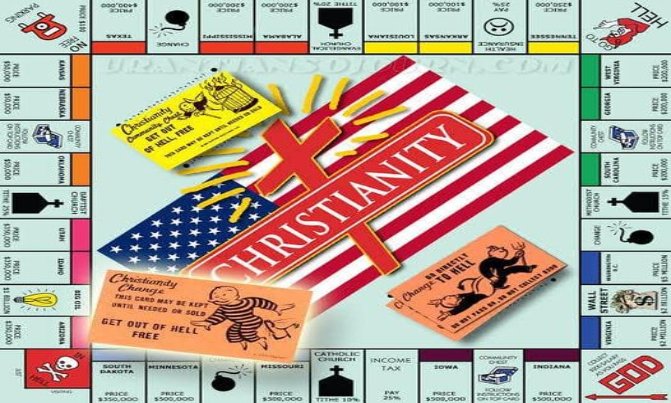 Religious monopolies exist in many countries especially those with the majority population and leadership leaning toward Islamic, Catholic or Communist beliefs, who conspire to delegitimise any other form of worship and expression of faith in God in order to have full control of the religious space.

It is no surprise therefore that the main proponents of the move to regulate faith-based organisations in Uganda are leaders from the Catholic and Anglican Churches although some pastors have equally joined the bandwagon. These persons’ support is more than or less hinged on the possibility of this proposed legislation effecting reduced or stifled “competition” from emerging churches as a result of the President’s Office assuming control over the people’s freedom of expression of religion and conscience by limiting this privilege to a small group of religious leaders who support the current regime.

By using discriminative government laws disguised as “protecting vulnerable members of society especially the children and the poor from being deceived” by promoters of “fake religions”, such crafted can only mean one thing -that all other religions and forms of worship shall be required to adopt beliefs and practices that are agreeable to the main religious groups.

One such example is when Uganda’s former President Idi Amin enacted a religious law in 1976 to curb what he referred to as “mushrooming churches”, whose promoters did not have academic qualifications similar to those of what he termed as “mainstream religions” i.e. the Catholic, Islamic, Anglican and African traditionalist sects.

With this law which was essentially intended to eradicate “fake pastors”, all pentecostal and evangelical churches were discriminately banned and it was illegal to sing their songs or profess to be “born-again” and worse still, anyone converting from a mainstream religion to the pentecostal or evangelical faith was at risk of a death sentence, if reported. If one did not agree with beliefs or traditions of the mainstream churches, he or she was also at risk of being punished or jailed.

Attempts to regulate the doctrine and worship practices of churches in order to align them to the Catholic setting is also not a new phenomenon, given the dark history of the Catholic Church in Europe. The Catholic Church often realising the loss of its congregants to new Bible-reading sects, would conspire with the State, under the guise of fighting heresy in God’s name, and used State machinery to crush any competition so as to establish a monopoly status which they still enjoy to date in many nations.

This religious monopoly status naturally had a bearing on the economic and political control not to mention the social welfare of a nation, in that the less competition they had from other christian sects, the more people the Catholic Church would register as catholics so as to gain political influence and collect more revenues from offerings than any other religious group.

This allowed them to dominate through charity work and ownership of a large percentage of land in the nation. This is potentially one of the reasons why politicians will have easy access to persuade crowds in one church by merely bribing the religious leaders of a monopoly to endorse them or allow them to speak to the church congregations during election campaigns.

This monopoly status given by religious laws, will also inevitably foster discrimination by members of the public against other forms of religious belief while cultivating a sectarian social system that gives special privilege and access to jobs, education and services to members of mainstream religions while denying qualified and competent individuals from minority religious sects.

Today, some still believe in instituting religious monopolies by requiring all religious leaders to undertake a State-licensed theology training as is the case in the Republic of Rwanda and now proposed in Uganda; apparently to prevent what they call “false” bible teachings and immoral behaviour among religious leaders.

This is absurd, seeing as nearly all (if not all) nations where religious monopolies have taken total control of the religious space, have been unable to prevent immoral behaviour by their religious leaders; inspite of the bureaucratic systems established by these monopolies.

The illusion of preventing immorality comes from the ability of the religious monopolies to hide immorality and crime within their systems of governance in addition to influencing the media not to report any such incidences so as to prevent the masses from losing faith in these monopolies.

For instance, the Catholic Church was recently publicly exposed for concealing decades of child sexual abuse by priests, bishops and cardinals all over the world, without any reported cases of prosecution and imprisonment of those responsible.

What are the odds that if such a matter arose in the Pentecostal Church, such a leader wouldnt be exposed immediately, prosecuted and punished by the law?What are the chances that such an act would not be splashed all over various media platforms or even given a front page headline mostly because it is “believed” that the simple structures in this Church do not allow leaders to hide their behaviour from the media and the State, but rather subject them to public scrutiny and exposure.

Conversely, Catholic priests are well protected in systems and isolated buildings where high level crime and immorality take place. Anyone who reports such cases is victimized and punished by the police for attempting to tarnish the image of the age old Catholic Church.

Additionally, the sufficiency of existing laws (penal, charity or incorporation laws) to regulate religious groups is conveniently ignored due to their objectivity in addressing the behaviour of individuals or groups without judging their religious affiliation or opinion.

The constitutions of most democracies require that suspects are considered innocent until proven guilty – which subjects any punitive proceedings to the requirement of reasonable or objective evidence to convict a suspect.

Needless to say, what religious regulations can only achieve is the license to lord the ethical, moral and traditional beliefs of majority religious groups over other minority groups.

This is done under the guise of creating order, which eventually will force all religions to deny or suppress their invisible spiritual qualities due to restrictions on spiritual expressions, in order to comply. Most religious and spiritual practices are subject to interpretation and thus not objective. Therefore such regulation will require experts to make an objective opinion or judgement about a spiritual or religious expression.

Since spirituality and religion are fundamentally personal choices of conscious and belief in the evidence of the invisible, the so called experts identified or selected by the State are likely to be holders of theology degrees in religions which can only provide pre-meditated interpretations of every spiritual experience a human being can or could ever have. This is bound to be a source of unending debate as one cannot ably or remotely interprete an experience he or she has not had.

Suffice to say, the intention to create a religious monopoly in Uganda and hand of the State in it is obvious. It reeks of an insatiable desire to control the masses and ensure their forced allegiance to the State; which can only breed oppression.