IT WAS NEVER ABOUT HIM

Over the past few days, the media has been awash with news of a Pastor, within the boundaries of Kampala City, having uttered offensive statements about his wife (well, till they divorce, she’s still his legal wife).

Who am I fooling? He has been making headlines in state-controlled media – in print, televised and radio waves – for the past couple of months or more because of a nasty ongoing divorce. However, the media reports were never about Pr. Bujingo; they were just a foundation being laid for the tabling of the initially contested Religious and Faith Based Organisation Policy/Bill. 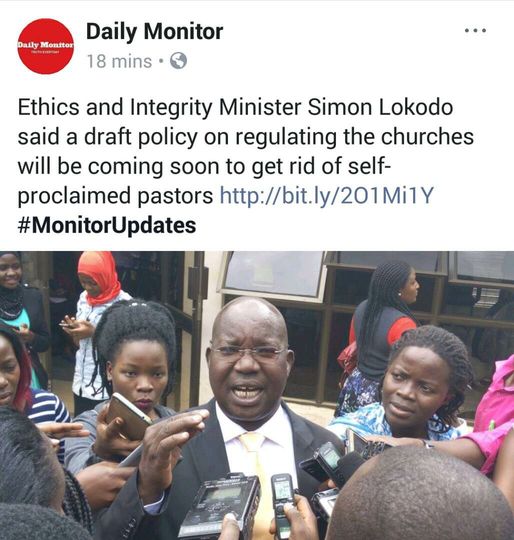 In order to help you understand, allow me walk you through the course of events;

– Since mid 2017, the Minister of Ethics and Integrity has been at it with this Bill. Initial fights against it were met with comments such as; there is no Bill, it’s just a Policy we’re working on at the moment.

– On the 30th of January 2019, the Bill was tabled before Parliament by MP. John Baptist Nambeshe. It was however met with resistance for all the right reasons; spiritual matters cannot be regulated by law, Uganda is a secular country, and we have enough Penal laws to deal with “wrong” characters. The attempt failed miserably.

However, the proponents of this Bill, led by Jezebel, met to reconfigure their strategy in order for it be more successful.

Since earlier reports against small fish conning individuals or impregnating women had not done the job well, this time, they opted for a bigger fish. He was good prey because they knew he was not one to go down quietly. A witness had presented herself, and if they harassed him for a prolonged period of time, he was bound to snap. Who knows how bad his snap would be?

– A month or so later, a state-controlled media house began running a story of his marriage woes over the Primetime news, giving him headlines in their local print media, and also making him the topic of discourse in several of its shows. In fact, according to an in-house source, they had enough “dirt” on him and were waiting for the opportune time to strike.

After over two months of harassment in the media, he snapped. The pastor made a not so good statement about his wife that not only appalled the general women movement in the country, but also the female members of his congregation. He fell right into their trap; right where they had wanted him all along. Moreover, attempts by the pastor to apologize to his wife, congregation and the general public fell on deaf ears.

– On the 15th of July, members of the women movement and school kids, sponsored and unsponsored took to the streets to demonstrate against the actions of this pastor.

– Members of the Parliament were also petitioned to do something about the situation.

Words like “self-styled” and fake pastors began to be casually thrown around.

On the 18th of July, the Minister of Ethics and integrity woke up with a “solution” to the entire situation – the RFBO Bill.

The situation has become disgusting to a large cross-section of the public. They have manipulated the majority and finally solicited a general outcry for a solution. This is how they plan to pass the law in Parliament with less resistance. Should any MP vehemently oppose the law, he/she suffers a great likelihood of being demonized.

The problem is, this pastor’s marital woes have nothing to do with the Bill Father Lokodo is proposing as a solution; absolutely nothing. I have said it before, that we have sufficient penal laws to curtail individuals that have conned members of the general public and obtained money by false pretences.

It has always been a ploy to pass the Bill targeted at curtailing the move of God. This is why I pray that we stay focused on the bigger picture; the move of God. Refuse to be used as a puppet in this show and stand for the right cause.