On the 24th day of September 2019, Joseph Kabuleta filed a suit in the High Court of Uganda, Civil Division against the Attorney General (being the State legal representative), together with Hon. Simon Lokodo and Rev. Canon Aaron Mwesigye (being the commissioners of this policy), over the unconstitutionality of the contentious Religious Faith Based Organizations’ Policy (RFBO). This notice of motion for declatory orders was filed under Article 50 (1), (2) and Article 29, 7(1) (c) of the Constitution of the Republic of Uganda as amended, Rules 5, 7(1) and 8 of the Judicature (Fundamental and other Human Rights Freedoms) (Enforcement Procedure) Rules, 2019. 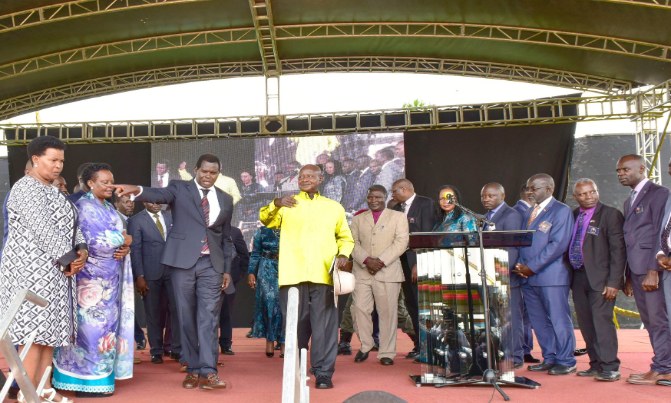 The longstanding battle between Religious Faith Based Organisations and the proponents of the RFBO Policy as spearheaded by Hon. Simon Lokodo and Rev. Canon Aaron Mwesigye dates as far back as 2014. It should be noted that this policy was promulgated with an aim to regulate religious and faith based organisations. It would also later lay a foundation for the tabling of the Religious Societies and Places of Worship Bill (2017) by Hon. Baptist Nambeshe-MP Manjiya County. The aforementioned Bill was however rejected by the Parliamentarians owing to its ambiguity.

As it appears, there are key areas in this policy that have repeatedly sparked off controversy and have ultimately culminated into Kabuleta’s decision to file a suit in a bid to secure recourse from the courts of justice as far as the reinforcement of the protection of his fundamental human rights as stipulated by the Constitution of the Republic of Uganda by virtue of his citizenship is concerned.

Furthermore, as one that equally subscribes to a Religious and Faith Based Organisation within the meaning of the RFBO Policy – by reason of being the Founder of Watchman Ministries and would therefore be greatly affected by its enactment into law, Kabuleta deemed it only prudent that he seeks court’s intervention beforehand. That notwithstanding, Kabuleta’s voice and action might just be very timely in representing the interests of other spiritual leaders across the board and a wider group of people that are in the same way totally opposed to this ill-conceived Policy.

We examine the loopholes in this Policy that have constantly been raised and yet have not been satisfactorily addressed by the powers that be, and which might have afforded the applicant valid grounds upon which to found this action.

Firstly, while clause 7 (c)(iv) of the said Policy attempts to acknowledge the non-adoption of a State religion in conformity with Article 7 of the Constitution, the same policy seeks to provide mechanisms of promotion of unity and diversity among RFBOs whose abstract end goal seems to point towards enforcement of a State religion. For purposes of this discourse, a State religion could span from a State preferred to a State prohibited religion. In the circumstances, the questionable proposed mechanisms include; streamlining the registration process of RFBOS, syncing of governmental and religious body functions in a bid to allegedly improve service delivery, as well as provision of a framework that is aimed at improving transparency and accountability amongst RFBOs. This begs the question as why there is a need for a separate legal framework for the Registration of RFBOs without due regard to the existent statutes like the Companies Act 2012 and the NGO Act 2016 which can ably regulate the same if considered. In any case, would it be far from the truth to conclude that the provisions of the NGO Policy 2010 barring the application of the NGO Policy to Faith Based Organisations only served to lay ground for the RFBO Policy? Additionally, if indeed the protagonists of the RFBO policy recognize the importance of self-regulation as highlighted in clause 7(c)(i) and clause 9, self –regulation, administrative and reporting obligations are already provided for under Part IX of the NGO Act, which provides, interalia for the requirement to furnish annual returns, estimates and financial information to the NGO Bureau. This therefore ought to sufficiently address the issue of transparency and accountability – a concern that has heavily been fronted as one of the main reasons for which the RFBO policy was drafted. Perhaps, instead of investing time and effort in duplicating already existing laws, the law makers ought to consider revising the applicability and functionality of such laws to ensure that they are inclusive and facilitate continual smooth operations of RFBOs.

Again, since time immemorial, it has been clear that the functions of the State and the Church for instance ought to always be separated. At no point should the Church compromise its authority and position under the guise of partnering with the State to improve service delivery. If anything, RFBOs are not any such ‘service’ providers and it is important that the Government fully embraces its primary duty of service delivery. RFBOs should only be engaged to the extent of offering advice as to how the Government should operate; given the Church’s superior status that offers it a vantage point in such scenarios and which arrangement need not be regulated.

Moreover, this Policy seeks to financially control RFBOs wherein planning and Budgeting for RFBO interventions will be provided by the Directorate of Integrity (DEI), for the purpose of advancing the Policy goals. It is therefore questionable as to whether the proposed structured procedural provisions that would apply should this policy be passed into law, would be impartial especially considering that the already existent laws have been conveniently overlooked. It can easily be implied that this law if passed could be highly suppressive in as far as narrowing down what is acceptable, which body may or may not fulfil the registration, service delivery and partnership requirements and operations thereafter, which RFBO may be deemed to meet the transparency and accountability requirements, which RFBOs would be entitled to funding by the DEI and relevant stakeholders; thus resulting into probable de registration, disbanding of already existing RFBOs and prohibition of registration of upcoming ones in the event that these RFBOs are found “wanting” and thereby achieving the objective of having a generally accepted religion-a State religion that is expressly proscribed by the Constitution.

To add insult to injury, the Policy provides for a very dysfunctional, unfair and biased institutional coordination framework that is responsible for overseeing the operations of RFBOs in Uganda. At the helm of it shall be the Office of the President through the Directorate of Ethics and Integrity which shall be the Lead Agency. There shall also be an RFBO Board as appointed by the Minister responsible for Ethics and Integrity. This Board shall be responsible for exercising the mandate of registration, regulation, monitoring and overseeing the activities of RFBOs as well as facilitating coordination, effective and efficient relations amongst stakeholders. Furthermore, it is stated that this Board may from time to time have its composition appropriately strengthened to enable it to conduct its functions. Important to note is that Board representation shall be seen at both National and District level.

Without taking away from this engagement, let us juxtapose the above scenario with the leadership of a nation-Uganda preferably. Article 98 of the Constitution declares the President of the Republic of Uganda to be the Head of State, Head of Government, Commander-in-chief of the Uganda Peoples Defence Forces and the Fountain of Honour. As such, every State official under the three Arms of Government as appointed by the President, directly or indirectly is accountable to him directly or through the various representatives as structured in the line ministries. This means that the President, through his representatives has every right and responsibility to monitor and evaluate their activities right to the grassroots level because their effectiveness or otherwise affects the overall functioning of the State. In the same vein, the President and public servants are accountable to the citizens on the governance demonstrated. Unfortunately, the operations and incompetence of government officials and non-apprehension by the responsible institutions has left a sour taste in the mouth of many Ugandans but that is not the subject of debate today.

Similarly, the Bible which is in essence the Constitution that governs the affairs of spiritual leaders cites countless examples of the relations between God and his servants. Interestingly, in an address made before a sizeable number of Pentecostal and Evangelist leaders in what was dubbed by the organisers as, a “first of its kind” meeting held on 23rd September 2019, the President acknowledged the unconventional way in which God operates, to the extent that some of the highly esteemed and anointed characters in the Bible like Simon Peter did not have to undergo theological training in order to qualify as men of God. This would only mean that due to such uncommon operations, the God who called them was/should be/is in the best position to appoint, reappoint, demote, monitor and evaluate the activities of these servants just like the Head of State would do to his officials. Clause 7(a)(iv) reiterates this position by stating that every RFBO leader should be accountable to God and the people he/she leads in terms of moral standards/integrity and spiritual activities. It is therefore very unbecoming of the President, the Directorate of Ethics and Integrity, and the Minister of Ethics and Integrity through the RFBO Board or otherwise to seek to regulate divine activities that are without a doubt beyond their scope of influence and/or comprehension. Moreover, it is doubtful as to whether the composition of such a Board would be informed by the peculiarity of the area that the State seeks to control, let alone the transparency of the projected consultations aimed at reaching a consensus on the methods of monitoring and evaluation; despite an allusion to such consultations being open and participatory as detailed in clause 12.2 of the Policy.

Resultantly, by attempting to tighten the noose on RFBOs under the facade of institutionalizing them, Article 29(1) (c) of the Constitution which provides for the freedom to practice any religion and manifest such practice including the right to belong to and participate in the practices of any religious body or organisation in a manner consistent with the Constitution shall be infringed. This is majorly because the RFBO Board would seek to regulate and control what is deemed to be acceptable religious practices and, which RFBOs meet registration requirements; thus ultimately curtailing the citizens’ right to enjoy the freedom of worship and to belong to RFBOs.

From the foregoing, would concluding that Joseph Kabuleta has a very strong case against the Respondents, occasion a “counting one’s chickens before they hatch” stance? Well, let justice prevail!