PRESIDENT MAGUFULI IS WRONG ON UGANDA’S OIL, BUT WHO ISN’T?

At the recently concluded first ever Uganda-Tanzania Business Forum, even before the media (mis) interpreted President Magufuli’s pleas to his Ugandan counterpart about the thwarted East African Crude Oil Pipeline Project (EACOP), I could tell from a few meters away that there was real temperament flying around. In the subtlety of things, a keen observer would notice that once the head of the largest East African country returned to his seat next to the man in a hat (not on the day) he shook the hands of everybody else around; first and more eagerly.

The highly anticipated Final Investment Decision (FID) which only recently promised to be a simple layer of lamination on a deal already over the line, is anything but. Disagreements with Uganda’s government on tax treatment of the proposed sale of oil interest (PSA) by Tullow to China National Offshore Oil Corporation (CNOOC) and Total has led the latter to suspend procurement activities relating to the pipeline. International Oil Companies (IOC’s) have a history of aggressive tax planning and as they say, maybe governments have learnt to fly without perching, but at what cost? 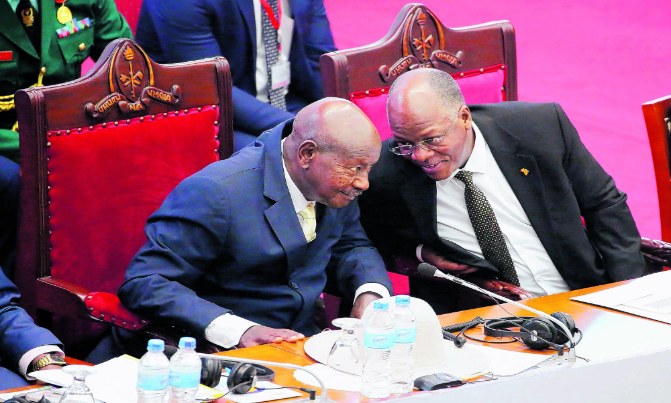 No doubt, the more senior politician took to the podium later and cracked jokes at why Ugandan delegates were using headsets yet Kishwahili was a Bantu language. Lesson learnt, if you must awaken a disgruntled audience with stale puns, you best be master of punchlines and at best take your best shot at self-deprecation rather than hitchhiking on an ego trip. Flatter your host if you must!

Never thought the frying pan to fire was a real thing until the Fountain of Honour attempted a foiled De Gea save by launching into a bizarre expose of Adam Smith, the Wealth of Nations and why Uganda is a wealthy nation (somebody clearly listens to Prophet Elvis Mbonye’s prayers!). Not a bibliophile of economics myself, I still conjured up the hapless English man rotating in his resting place. Nonetheless, it must have been a wintry toothache for any Economics Professor in the room. In such moments, I feel for many a resigned citizenry, indifferent to the rhetoric; looking at the sky to see how God and his angels were passing the time.

On the sidelines of the event, I by happenstance (if that suits your fancy) met a greatly talented team working for the pipeline project. In their own words, it soon will be safe to say, “worked”. This is the one venture I once strongly thought of lending my skills to in some way so I was keen on peeping into sizzling and flavorful insights from the chefs in residence. As the inaugural cohort on something as promising as it was exciting, the energy and enthusiasm was typical; Boy, was I in for a perfect storm. Said energy was channeled against me for not properly advising my President on the benefits of the project, the number of jobs at stake, all through to the Iceland and Antarctica of energy economics and necessary tradeoffs. They, fine professionals and patriotic souls were as tipsy as lords, not entirely because of the free-flowing assortments as the brewing steam of a looming bleak future.

If one is having one’s last pint as an employee of a budding venture, when one spits in your drink, realigning one’s dental formula is not ideal, precisely because the prevailing insurance policy will not cover the required denture. I would have loved to ask more serious questions. Questions such as; how did the project sponsors hedge against legislative prerogative to avoid erosion of the economic viability of the project? Alas, with their day jobs and all attendant insights piled in the out-tray, there was no point in reawakening jilted romance. I bit at the bitter phlegm depressing the oesophagus, swallowed and straightened the clenching fivefold. That was a different kettle of fish, need I say?

If you insist on convicting me by association, I underscore that it behooves all and sundry to realize that some people you chance upon are masters of the universe; remnants collecting their global harvest and not inevitable allies to questionable policies and entrenched bureaucracies. It should also be obvious that if choppers and concords were an integral part of an entourage, traffic jam would not be an issue; but this is an adage for days, I indulge no more.

They did not realize that across the border, in a basket of ripe mangoes, a benevolent patriarch picked and shared one baby mango among civil servants as an oil handshake. They did not realize that the public made noise about the baby mango for a few seconds and returned to wallowing in saw dust flowing from the workshops in Katwe. Workshops in which, the welders that toil day and night will never brighten their eyes at the Arc Voltage of the anticipated pipeline. They did not know that local content and community participation are fancy policies but effectually artificial constructs benefitting a paltry click of technical know who. Maybe they did, maybe they do, what do I know?

They did not know that across the border, a one Mr. Kabuleta said oil was being exported and earned himself a gentle scoop off the street, complete with an involuntary siesta at a state VIP lodging. They did not know that despite the failed attempts to rebut Mr. Kabuleta’s oil rant, pictures of oil exporting trucks kept circulating in Kenya and Uganda with uncanny resemblance that it could only be by pure magic to pull off the similitude. Oblivious they were that while experts and well-paid promoters argued that Uganda’s oil was too heavy, waxy, sour and may be pepper spiced to be transported in trucks, a certain website lists Uganda among the top 100 oil exporters in the world. All this goes to show that illusionists are not on a slumber party where Uganda’s oil is concerned. They did not realize that independent, hard hitting honest opinion is rare, in this sea of Yes Sir and how high Sir! As rare as finding a slimy live and jolly tilapia perched, high on the pinnacle of a solar streetlight on Jinja road, very far from the Nile.

Maybe they were learning from their President. Mr. Magufuli has not auditioned for roles as the kindest host to investors but he is not slothful and taking his chances. While many commentators were stunned by the decision to move the oil pipeline route from Kenya to Tanzania, Mr. Magufuli went straight to work in preparation for the prospectively free-flowing black gold. It must have felt finger licking good to sign the Inter Government Agreement (IGA) in 2017. To be honest though, it was always going to be difficult to navigate the different regulatory, tax, political and economic considerations contingent on the massive project spanning the over 1,400 kilometer stretch from Hoima to Tanga. Mr. Magufuli and Tanzania have invested a lot of time, energy and resources on the project and stand to lose if it does not proceed. To that end, his disappointment is excusable.

Whereas President Magufuli can always fall back to his sovereign edicts, it is the investors that should be put on notice by such uncertainties in policy. Total, CNOOC and Tullow would be ill advised to sink considerable capital in our parts without concrete stabilization clauses to mitigate likely vagaries over the score plus tenancy of the pipeline. Similarly, if the question of the refinery is not resolved ab initio, the volumes of barrels per day (bpd) required to meet the expected mark up and invariably expected return on investment might flash all projected earnings into another tunnel of pipe dreams. Here is where President Magufuli was right in principal even if I labour to shove this narrative into rather than from his lips. By now and especially via the Host Government Agreement (HGA), the project should be subject to a bespoke tax regime rather than separate country malleable codes morphing at a whim. President Museveni though quick to parrot science and economic modelling, seems not to factor the same in treating investment risk regardless of what is at stake.

Ugandan technocrats have been ambitious in modifying tax regimes to capture as much rent off the evolving hydrocarbon value chain. Sometimes though, considerable gains have been lost in translation. If the tax treatment of PSA disposals was adjusted to prevent companies like Heritage Oil from repatriating profits en masse, is the same approach helpful where Tullow Oil wishes to raise project (EACOP) funds from the disposal? Is this not complicated further where Total has a first right of purchase in case of sale and insists on a tax relief on the transaction? Is it realistic to hope that the nascent Uganda National Oil Company (UNOC) can carry the burgeoning weight of sponsoring the abandoned portion of the project portfolio?

Mr. Magufuli though right in part overstates his hand. He may very well speak for his people but does he speak for Ugandans? Is he sufficiently invested to advise Uganda on the right tradeoffs for a meaningful extractives sojourn? It may be second nature for Mr. Magufuli to disband his entire cabinet and revenue outfit but is he cocksure that Ugandan technocrats are the problem and deserve the guillotine? Does he trust that our 27 gun wielding Generals are the class of coroners agile enough for the autopsy he prescribes?

Investors should be jaded by now, specialized skill is going to waste, both International Oil Companies (IOCs) and UNOC have lost valuable talent and leadership in the clutter of this impasse. We are losing significantly on failed cashflow projections and for all the bravado and hype, we are no nearer than where we started. If we do not see the need for developing a bespoke approach to natural resources extraction, meaningfully highlighting nuances along the way but focusing on maximum benefit to stakeholders, this oil rush is no less than fool’s paradise.

The Writer is a Lawyer and Author