It is an open secret that the laws of Uganda and its attendant machinery and dare I say political machinations are designed to give incumbents a headstart in electioneering. Any politician trying to campaign at this point will be faced by flying porcupine hair from some black book of this our democratic banana Republic. Dr. Kizza Besigye cannot freely be hosted on talk radio, some people cannot perform at innocuous kyidandali concerts and guess what, we have a government that is suddenly keen on regulating fashion! 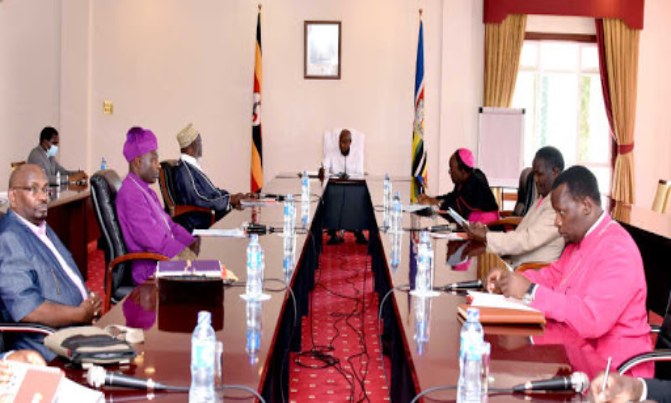 Conversely, President Museveni is free to sell his yellow brand across the country in a plethora of activities. I could care less about political science and third world politics; in any case, if one has grown up in this immunised era, gone through the benevolent UPE and USE systems of cramming ever changing number of districts and irrelevant Canadian prairies, what does one know? For argument’s sake, we will call; the wealth creation campaigns, outlandish bye-election endorsements and overthetop launches of government programs, meet and greets, cameo appearances at silent majority Bazukulu concerts; occupational hazards and not political campaigning. If you have chased your animal through several triangles and locked it in a perfect deadfall, branding exercises come with the territory, don’t you agree?

Where though is this approach ill advised? Out of the stable, I would say the unholy alliance between the President and the Balokole old-guard is a still-birth in an incubator, wasting tax payers’ money and many a pensioner’s energy. On this one, he is a fish out of water even though he might not yet realise it. If the President’s endearment to the Balokole community in the 80s and 90s was his supposed rescue and validation of the Kiwempe movement, that ship has long sailed, in-fact it has docked a thousand miles away, beyond the mark set by Christopher Columbus and Vasco Dagama; close enough to Tesla territory, if not beyond.

These supposed Balokole leaders, never a better place to use the notorious phrase “self-styled” traversing the country holding wealth creation crusades are the worst allies for anyone seeking political affinity with the Balokole community. First off, they are flat out liars; paradox of paradoxes! Yes, they are pull-neck choked in debt, inchoate building projects, unpaid media staff and tax evasion hide and seek but guess what; this old guard has the liquidity to dish out their own benevolent change to Ugandans across the country. No, we are not aware of the late night meetings in Kalangala, Mukono, the Serena and Nakasero hill; we are haplessly blind to brown envelopes and Mpekoni’s financed by state budgets.

Ever since most of them run out of schemes to dupe American patronage and kitole visas, this old guard has resorted to kissing some military boots (yes, the people faulting Mr. Joseph Kabuleta for kissing Prophet Elvis Mbonye’s shoes have sold their souls to the state and are unapologetic about it). Do not be deceived by their supposed media assets all over the place, with Uganda Communications Commission (UCC)’s overreaching affront, there would be no TV or radio license renewals for the Serrwada’s and Ssenyonga’s if they were demonstrating the supernatural and unadulterated word of God that government is vehemently against.

They recently organised a sham high level meeting with the President, gathered hordes of well meaning people to prop some numbers but the distraughtness on the majority was evident. Ironically, they are a handful but still bicker over who poses with the President or shakes his hand; at least their father Judas had the unity of mind to convince his investors to pay full value upfront for his bounty. Poor believers at Cricket Oval were left to fight over veggie samosas and pints of super dip before trekking the dusty hillock to downtown taxi park. In broken record fashion, for the state prophets hosting the Head of State the usual disgusting pageantry of giddy school girls and pissing contests was ever so prevalent. How predictable! More have hosted the President before and in the wake of the shambolic meeting at Lugogo Cricket Oval; received their fair share of part payment in brown envelopes but the President’s wallet keeps pouring in a bottomless pit of discontent in trying to appease Balokole. Still, the real alert Balokole who are no longer Kiwempe, no longer the visa fighting for type; have maintained their resolve against religious oppression with clear articulation and consistent rhetoric. Either the President has lost touch with this demographic of Ugandans or does not care that he is creating the most passionate enemies yet!

Bottomline, we in the Balokole community do not know those people anymore than we know Mama Jonah, Musuuza, Sebunya and whoever else somehow makes it to mainstream media mbozi za malwa these days. They are as irrelevant as the difference between night and day, period! You do not need a degree in rocket science to realise who the opinion leaders of the Balokole movement in one of the youngest populations in the world are. If you are honest with yourself, you will know already that Prophet Elvis Mbonye and his remnant boys and girls including the Joseph Kabuleta some princes love to hate and lock up will galvanise more youth in this country more than the entire Balokole old-guard combined, given some EBITDA boost from state resources.

Relatedly, it is bad enough that a person excommunicated from a religion in which he is supposed to be a priest is trusted to galvanise diametrically opposed religious views. If Fr. Lokodo was not good enough to be accepted in the Roman Catholic church, I wonder how he is expected to be trusted by the Balokole. Yes, he may be a conduit of measly gestures to old men riddled with jealousy against the young and flamboyant servants of God sweeping the flock into the freedom and prosperity that they have since ditched for tyrannical control and intimidation. Yes, he can refine talking points with people quoting Oprah and President Museveni rather than the Bible and spiritual revelation. Yes, he can share the perks of his office to pay for inventory and running costs that the God they once listened to 20 years ago has become silent to come due on outstanding Series E equity. Alas, how Fr, Lokodo and his boss are wrong to think that all Balokole are a bunch of fools herding in the petticoats and extensive fabric of putrid cassocks.

In light of the above, well aware that Fr. Lokodo is so inconsequential in the decision making matrix of the NRM echelons (and this has nothing to do with what region of the country NRM henchmen purportedly hail from), he has been pawned on the beginner side of this chessboard against the Kasparov of the Balokole movement. It does not help that he has enlisted mere props and extras in the fictitious Queen of Katwe box office release for guidance and support on Olympic centre court. Everybody knows that the RFBO policy is an instrument of religious oppression even though everybody welcomes it or abhors it for personal or ideological inclinations. Everybody should know that for one of the few educated people from the Eastern horn of Uganda (blame UPE for my warped geography prowess), Mr. Lokodo’s skills would be better employed elsewhere. I wonder if the people he represents understand what job he does and how irrelevant it is to their daily struggles. Famine and urbanisation struggles in Karamoja will not be solved by the RFBO policy, Lokodo should care enough to devote his energy to gainful ventures in honour of “For God and my Country”. He has failed miserably on the antecedent part of the motto, let him try his skills on the consequent other!

Sooner or later, this little endeavour will crumble faster than a house of cards, the Balokole old guard will run out of lies and hyperbole to solicit state favours and accept the fact that they have become irrelevant in the gospel that propelled them out of oblivion. Sooner or later, all personal funds, printed notes, oil money, tax-payer’s contributions or wherever else these Wealth Crusade gimmicks are being funded from will become porous and we will all get back to sense and sensibility. Basically, we will all be fine, but will President Museveni? Some soundtrack by Sam Smith in a James Bond movie has my concluding line!