TEGU’S GRUESOME “MURDER” MIRRORS THE FATE OF EVERY PERSON OF FAITH IN UGANDA!

I saw the story, I weeped, I bled inside, I looked to the skies above!

The story that neither NTV, NBS, New Vision and all those typical State media mouth pieces will report; is that, the lad was found “praying after curfew” and beaten to you know what end.

If you are one of the naive ones who think that the regime is incapable of torture, think again. I have been kidnapped, tortured and returned to see that the “police spokesperson” lied about what happened! But he had the mic to which all Ugandans were tuned, so… (you get the point). Some people have shot themselves during lockdown. I guess, some have even taken poison after their burials. It you can spin it hard enough and you have the audience, it will be believed. 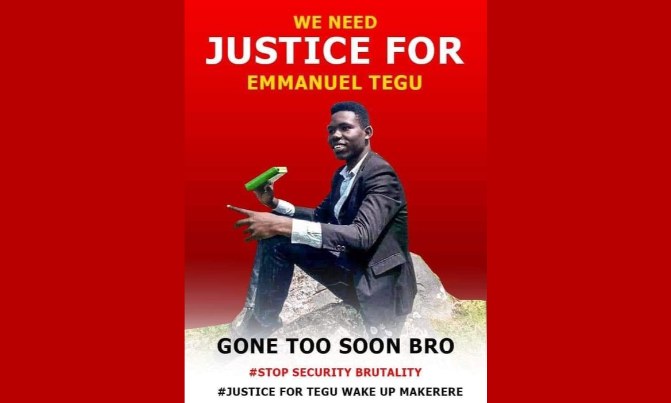 The main concern you should have is; when did prayer become so sacrilegious that even if there was a law broken, the suspect should be clobbered to death rather than, taken through the justice system for “a fair trial” and given an “appropriate sentence” if found guilty?

Why are churches conveniently closed; with Serrwada, Kayanja, Senyonga and all those “leaders” who consult with the President and Lokodo on church affairs not bothered. They are instead, distributing soap, campaigning for another term and watching as temples are desecrated into NRM ideology pulpits.

I wish I could say that these kinds of hypocrisy, hostility and religious extremes surprise me, but Alas! they do not. I won’t bother you about khaki envelops, media house licenses, car gifts, and all types of goodies that your leaders swallow to sell you out!

I will tell a simple story.

Long before I became a lawyer, long before I decided that I should become a corporate attorney so that I could somewhat wrestle my conscience outside the injustices I witnessed, I was Emmanuel Tegu. I was one of those kids who prayed in the morning before prep, in the night after prep, behind the chapel, behind the dorms and even beyond the high school campus.

This was so many years ago but the memories remain vivid. The chaplain then, (a certain Bishop now) whom you will not be surprised to find supporting the regime at every turn, abusing and I am told (going bare knuckle with other faiths in his constituency) was our chief tormentor. In case you still can’t tell, he was the genius who discovered the actual birth date of the President (a fact that had eluded everybody for 70 + years)! Rest assured every so often, you will read an article from him on church this, church that but the gist is always the same BS. He just happens to be one of the few clergy that can be trusted to play with words on a page (thanks to his PhD), and educator background!

The more things change, the more they become the same.

Despite the said chaplain’s PhD in theology, we were accused of worshipping trees (because we raised hands as we paced behind the chapel, which happened to have many trees!) There you have it, the simple PhD definition of a cult.

On one of those fateful nights, before I would be handed my umpteenth suspension letter (for praying outside designated hours); after the leadership had read to us our supposed crimes, I took a stroll with the chaplain (then Deputy HM) out of the guillotine. As we approached the fork in the road to our different destinations, he attempted to advise me on how to tone down my passion for prayer things. The conversation turned into a 3 hour argument on Bible, church and everything I passionately believed; everything he took as no more than philosophy and tools for moral conditioning of the populace. I was the naive believer with unwavering convictions, he was the cold academic with the references but zero “prick” in heart.

Years down the road and only one of us has proved the other wrong. I think I have done well for myself, without abandoning my passion; I daresay, because of it or the increase of it. I would die for my faith then, I would now, there are no two ways about that. He has risen through the ranks to perhaps the second highest rank in the local religious system without changing heart. It has served him well to remain an academic who will conveniently witness against the church for the benefit of political patronage and job security.

Our paths have crossed many times since, and having no personal vendetta agains the man in cassock, we always find a few things to strike chitchat over. His tone no different from; “my son, I am glad you have turned out better than I hoped, that can only mean that you changed your extreme views”, mine; ever so insolent as, ” I am probably more zealous for the Lord than I ever was, that is why I remain on the path of blessed destiny that I always had on the inside, latently hidden from the likes of you”.

This is no way to create a BFF but such is life. The importance of faith differs for different people, and if that was the only challenge, we would not be crying foul.

Here is the upshot! The church is not safe in Uganda, it never has been. Religious oppression is every bit systemic and is propagated conveniently by getting a few Judases who are willing to pawn the faith for (each one a different price)!

Unfortunately, the faithfuls, a different kind of gullible swallow the deception; hook, line and sinker. In typical Ugandan fashion, they will scroll through posts about Tegu, wait for the “official police report” on the incident, maybe a few cosmetic arrests will be made, and we will all look forward to martyrs day, post about Namugongo and the faithfuls who died under Mwanga.

In Uganda, it pays to be a zombie, quenching your thirst with yellow pills and portions poured through your self seeking religious leaders.

I am not one of those who wear their faith in their heads and not their hearts. Like Daniel, I will pray 7 times a day even if you put a gun to my head not to. I will pray beyond curfew, on the roadside, in the office, anywhere.

I am still Emmanuel Tegu and I am an endangered specie. Like every person of faith, the sword of Damocles, as a pendulum keeps swinging above my head every so often, it is just a matter of time for it to find its frame!

Tegu has died at the hands of a system that detests real Christianity with every vein in their bodies, but if you are like my school chaplain, his belching colleagues in the proverbial vestry; or follow people like him; this should not bother you at all.