The Religious atmosphere in Uganda for the past couple of years has been tense due to rope pulling between the Ayes and Nays of the Religious Faith Organizations Policy. As discussed in our earlier articles , the proponents of the Policy purport to be helping the Government determine acceptable ways of worship across the different religions, and protect the citizens from potential cults, while the opposers of the Policy believe that it is a carefully designed piece of law intended to bring about religious suppression and oppression in the country.To put it mildly, it is intended to put God and those that ascribe to him under the armpits and control of the State. 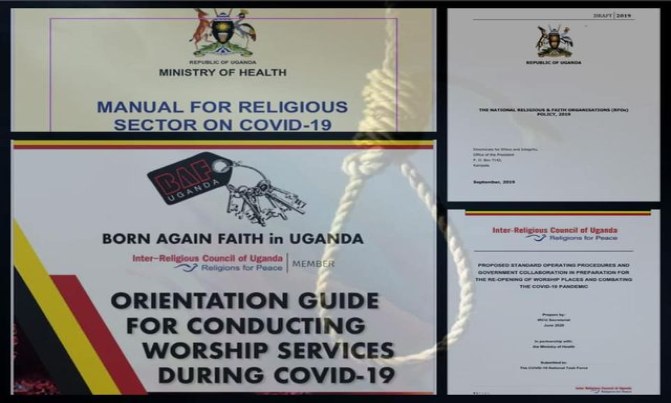 At the peak of the public outcry against the proposed RFO Policy by the Inter-Religious Council of Uganda, President Yoweri Museveni decided to have a meeting with pastors from across the nation on the 23rd of September 2019 at the Lugogo Cricket Oval. After this meeting, it all seemed like the RFO Policy had been shelved much as deliberate mudslinging and character assassination of some spiritual leaders, using different media channels continued. Unknown to the unsuspecting members of the public was the fact that the Inter-Religious Council and the Government were just waiting for a more opportune moment to present the RFO Policy or anything like it. That opportunity was presented by the Covid19 pandemic that found its way from Wuhan, China to Uganda in 2020.

On the 18th of March 2020, President Museveni banned all public and religious gatherings countrywide as one of the safety measures to curb the spread of Covid19. On the 1st of April 2020, a general lockdown was imposed – Uganda having registered a good number of cases by then. However, two and a half months later, with Uganda displaying a high level of managing the situation and great medical prowess, the President decided to ease the lockdown. By the end of June and beginning of July, not only were non-essential workers back to work, but also, public transport, salons, malls, downtown markets, Kikuubo, and eventually, arcades were opened upon inspection being done for approval of opening the same. All this while, not only had Uganda registered a 90% recovery rate amidst an ill-equipped Health Care System but also, there had not been a single death registered and yet there was little or no regard for divine protection from God. To add insult to injury, the Head of state further deferred the opening of places of worship on the basis of the former being the most dangerous setting from which the Corona virus could be contracted by the very people present in every other location where the lockdown had been eased.

However, due to mounting pressure from various Spiritual Leaders and people of Faith; as well as influential political/opinion leaders, president Museveni in his last address commissioned the Inter Religious Council to take charge of coordinating with the Government ‘Scientists’ and the Ministry of Health in a bid to generate a draft of additional safety measures for religious organisations before any consideration of lifting the ban on places of worship can be considered.

Indeed, the IRCU did what it has come to be known for: proposing unreasonably stringent measures for its ‘own’ just as it had done with the botched RFO Policy! In July 2020, religious faith organisations were presented with Standard Operating Procedures (SOPs) that apparently had to be taught and incorporated in places of worship before the latter could be reopened. What is even more perplexing is the fact that Christian Faith organisations have been slapped with three different versions of Church SOPS; 2 of which are aimed to guide the Born again Pentecostal sect as developed by Bishop Joshua Lwere and Dr. Joseph Serwadda respectively, while another has been fronted by Arch Bishop Kazimba Mugalu. One therefore wonders why and how Faith leaders would entrust the operation of their churches with a bunch of “leaders” that are evidently disunited or self seeking to say the least. That aside, here are some of the glaringly unreasonable propositions developed by these apparent “church” leaders for their brethren.

Firstly, as per the varied sets of guidelines, all places of worship are mandated to comply with the suggested SOPs if they are to reopen on 30th August 2020. In fact, according to the Ministry of Health Manual for Religious Places on Covid19 authored by Bishop Joshua Lwere, non-compliant places of worship shall have their gatherings suspended.This stringent measure is equally the other sets of Covid-19 Church SOPs.

Secondly, the regulations and guidelines are unfair in as far they all intend to exclude the elderly and children from participating in worship without just cause.Let’s think about it for a moment: of what benefit is it to marginalize children whose parents would have access to those places of worship ? Also, if children are not banned from any other place save for houses of worship, is such a measure intended to suggest that this ‘clever’ virus only has the propensity to spread to children while they engage in congregational worship?Are the draftsmen of such guidelines more concerned for the welfare of children than latter’s parents/ guardians and the God they seek to worship ? Your guess is as good as mine!

The cherry on top is the assertion that houses of worship that do not meet the SOP Health “standards” will not be issued with a certificate from the Ministry of Health and/or a of worth – a condition necessary for reopening. This is nothing short of replicating the RFO policy that equally empowers a national RFO Board under the auspices of the Office of the President, to determine which Faith Organisations may or may not operate by virtue of issuance or revocation of licenses by the said RFO Board.

Evidently, these SOPs seek to entrench the iron hand of the Government in the Houses of Worship under the pretext of “co-operating” with the Government to defeat the Pandemic so much so that these ill advised SOPs mandate leaders to allow government to give updates in the course of the service and health campaigns to be incorporated in the main announcements. In other words, this would be an outright imposition by the State on what and how congregational worship should be conducted. Therefore, acquiescence to this would amount to succumbing to suggested acceptable ways of worship by the state.

That said, a few questions that ought to be addressed keep on tagging at our minds;

– Where does the Inter-Religious Council of Uganda derive its mandate from?

– Why did the IRCU fail to come up with a unified version of SOPs to apply across the different faiths? Is it that the different leaders are striving to have their endeavours recognised?

– Why is an entire country being forced to comply with guidelines that have been drafted by a body that a large cross-section of Ugandans do not subscribe to?

– Why is there strong insistence on the fact that Religious Leaders ought to be trained before their places of worship can be reopened yet operators of less organized places never received any sort of training before they could be reopened? (Case in point – downtown, arcades and malls which merely got inspected once).

– Why are places of worship supposed to obtain a certificate of worth before they can reopen – yet other public places were never required to obtain the same?

It is quite clear that the SOPs were drafted by a bunch of people professing a powerless god, bullying those that are not of the same mindset into adopting them, by making use of their relationship with a Government that has satiated their appetites. It is also quite clear that the proposed SOPs are intended to serve the very purpose the controversial RFO Policy was intended for. It is the same noose, branded differently!

The author is a lawyer with Crownel Co. Ltd