THE UNTOLD STORY OF THE 2019 ELECTORAL REFORM LAWS IN UGANDA 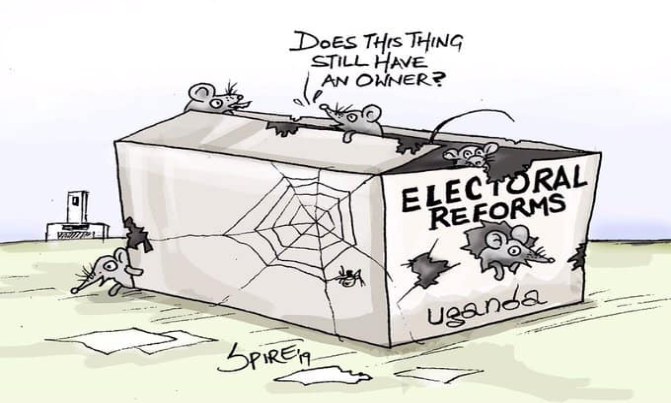 The same were gazetted on 24th July 2019. The Attorney General then tabled these Bills for the first reading before Parliament chaired by the Speaker of Parliament, Rt. Hon. Rebecca A. Kadaga who subsequently forwarded the five Bills to the Legal and Parliamentary Affairs Committee; being the appropriate Committee to scrutinize, and report on the same to Parliament thereafter.

The origin of the above mentioned Bills can be traced back to the presidential election petition filed by former candidate John Patrick Amama Mbabazi against President Yoweri Museveni in 2016, where the Supreme Court upon delivering the verdict on this petition recommended some electoral reforms that in their considered opinion would improve the running of the 2021 general elections and beyond. These include extending the filing and determination period of presidential election petitions to 60 days to enable the concerned parties and court to adequately prepare and present their case, regulation of public officials in elections and punishment of media houses, which refuse to grant equal airtime to all presidential candidates and prohibition of donations during elections, among others. However, the amendments recently tabled by the government are different from those recommended by the Supreme Court.

Before we can delve into the specifics of the content of the abovementioned Bills and the implication thereof, it may be worthwhile to address our minds to the process of tabling a Bill from first instance right up to when it is passed into Law.

Part XVII of the Rules of Procedure of the Parliament of Uganda provides for the form, requirement of publication in the Gazette, and introduction of Bills into the Parliament. At the time of introduction of the Bill, the Speaker of Parliament invites the member in whose name the Bill stands on the order page to move the Bill and have it read for the first time. Thereafter, as stipulated by Rules 113(2) -126 of the same Rules ofProcedure, the Committee is required to examine the Bill in detail and make all such inquiries in relation to them as the Committee considers expedient or necessary, make propositions for amendments and report to the House within forty five (45) days from the date the Bill is referred to the Committee unless, extra time is sought from the Parliament. Following the above procedure, the Vice-President, Minister or other Member in charge of the Bill shall then move that this “Bill be now read a second time” and may speak to the motion. The Chairperson of the Committee to which the Bill was referred or a Member of the Committee designated by the Committee or by the Speaker is expected, after the motion for the second reading has been moved and seconded, to present the report on the Bill to the House. Afterwards, a debate shall then ensue on the merits and principles of the Bill on the basis of the explanatory memorandum and the report from the Committee. It is worthy to note that the Second Reading of such Bill should not be taken earlier than the fourteenth day after the publication of the Bill in the Gazette unless formally suspended for the purpose. Whenever the Committee Stage of any Bill is reached, the Speaker shall leave the Chair without putting any question and the House shall then resolve itself into a Committee of the Whole House or a select Committee elected. Immediately the Select Committee or the Committee of the Whole House has reported, the House may proceed to the Third Reading of any Bill reported “That the Bill be now read a Third Time and do pass” and subsequently forwarded to the President for Assent.

In light of the above mandatory procedure, the relevant Committee has unfortunately not been able to timeously conclude its report and make its presentation to the Parliament within the stipulated 45 day period but intends to present it upon resumption of the Parliament Plenary’s business in November 2019 after close to three weeks of Parliamentary Recess. Nevertheless, we invite you to analyze the spirit behind and content of these Bills as we await the considered report of the Legal and Parliamentary Affairs Committee.

Firstly, under the Political Parties and Organisations Bill, 2019, political parties are barred from having links with pressure groups. Furthermore, the Presidential Elections (Amendment) Bill, Parliamentary Elections (Amendment) Bill, Local Government (Amendment) Bill also propose that a candidate shall not be eligible to run as an independent candidate unless they ceased to be a member of a political party or organization twelve months before nomination or have never been members of such organisations backed up by evidentiary proof, and yet at the same time, a person elected to the Parliament as an independent candidate is afforded a right to enter into alliance with any political party of their choice upon joining Parliament. Evidently, this proposal is intended to bar candidates who may wish to change their affiliation from their political parties especially the ruling party with the inevitable unfortunate effect of preventing the people from choosing whom they want to lead them. It is questionable as to whether this proposed enactment is not in contravention of the supreme Law of the Land; specifically Article 29(e) that provides for freedom of association which shall include the freedom to form and join associations or unions including political organisations. While we appreciate that Article 43 of this Constitution allows for the derogation of fundamental Human Rights and freedoms, it is of paramount importance that the proponents of these Bills justifiably demonstrate that the cause of such derogation falls within the parameters provided for in this Article. Additionaly, according to the Electoral Commission roadmap, nomination of candidates for Presidential and Parliamentary elections is slated for between June and October 2020. If these Bills were to be passed into law at a later stage, it is obvious that it would not be possible for any candidate that is currently affiliated to a political party to stand as an independent candidate due to the 12 months’ time requirement.

Secondly, the above Bills also require candidates to declare to the Electoral Commission within Fourteen Days after nomination day, the source of funds for financing their election. However, whether the Government seeks to devise mechanisms to monitor and prevent raids of funds from the central bank, ministries and international assistance accounts in the period and during campaigns in order to protect the integrity of the campaign process or in actually seeks to tighten the noose on such sources and control the source of such funding in various ways including but not limited to declaring some sources illegal is only a question of time.

Thirdly, the Local Government (Amendment) Bill seeks to amend Section 128 of the Local Government Act to the effect that the presiding officer at each polling station shall be permitted to commence opening the ballot boxes in the presence of at least five voters as opposed to the previous arrangement provided for in the principal Act where the results are/were to be declared before interested parties. At the same time, cameras, mobile phones and any related recording devices are prohibited from a polling area as per the content of this Bill. One cannot help but wonder whether this proposed amendment is viable in as far as catering to the interests of all the varied parties; not to mention the possibility that all the 5 voters may in fact be in favor of a single candidate which would most probably compromise the impartiality in conducting this process, in the event that an irregularity is observed. Again, in an era where technology runs the day, it is questionable as to why the proposed amendments seek to exclude this vitality that was very helpful in the 2016 elections especially concerning reporting of voting abnormalities. This proposal no doubt reeks of mala fide intentions. It goes without saying that it is intended to hide evidence of any malpractice.

Furthermore, an Electoral Reforms Committee may soon be established once Parliament adopts new amendments to the Electoral Commission Act. The establishment of the committee is among the reforms in the Electoral Commission (Amendment) Bill, 2019. The proposed Electoral Reforms Committee will work in liaison with the Uganda Law Reform Commission to study electoral laws and consult relevant stakeholders on proposed electoral reforms and others. The Committee according to the Bill will also be tasked to recommend concrete proposals for electoral reforms to the Minister of Justice and synthesize various reforms proposed by political parties, election observers, monitors, civil society and others arising from court decisions. This proposed Committee will have four persons representing the Electoral Commission, three persons representing the Attorney General, the Secretary of the Uganda Law Reform Commission, a person representing political parties nominated by the National Consultative Forum, a person representing the Civil Society appointed by the Chairperson of the Electoral Commission, the Permanent Secretary of the Ministry Local Government and the Permanent Secretary of the Ministry of Gender, Labour and Social Development. While this Committee could potentially address the past failures by the Government to implement reforms resulting from election petitions, court decisions and Civil Society Organisations, it is imperative that the parties to this Committee operate free from undue influence by the powers that be, especially because each of them is in one way or another appointed by the President of the Republic of Uganda. It is an open secret that a number of government officials are often put in positions of compromise of their work ethics in a bid to retain their jobs. We therefore cannot help but hold the composition of this Committee in suspicion; let alone the quality of electoral reforms that would emanate therefrom.

Overall, these proposed amendments are shrouded in confusion and are anti people. From the foregoing, is it coincidental that reforms of this nature are being tabled ahead of the 2020/2021 General Elections? Might there be more to these reforms than meets the eye?