WHY DID MUSEVENI REJECT AMAMA MBABAZI’S PROPOSAL TO HAVE TWO PARLIAMENTS IN UGANDA?

‘Two Parliaments” – are called ‘Bicameral’. Let us knock the jargon out of the way before we beat this horse senseless. A bicameral legislature divides the legislators into two separate assemblies, chambers, or houses.

Bicameralism is distinguished from unicameralism, in which all members deliberate and vote as a single group, and from some legislatures that have three or more separate assemblies, chambers, or houses. Examples of this are the UK, US, Kenya, Nigeria, Zimbabwe, Burundi. Globally though, the figure is less than half, so Uganda is among the majority; unicameral legislatures.

Beyond the scope of this piece, you may want to check out the difference between perfect and imperfect bicameralism and where a primary legislation requires concurrent majority, or one chamber can overrule the other. 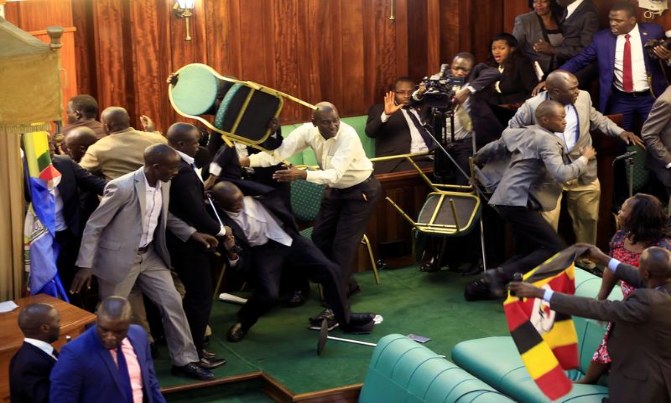 Sometime back, President Museveni was quoted as threatening to completely do away with Parliament. If you have qualified as a lawyer or political scientist in this immunized generation, that statement could have come as an absolute shocker. The curriculum presents the Constitution of Uganda 1995 as the Grand norm (fundamental norm) where separation of powers, checks and balances nebigendelako are the rule of thumb. Fourth estate cultists may easily be more alive to the fact that Uganda has an extremely centralized center of gravity (manya power) and are less illusory about the textbook paper streaks.

The President’s remarks were in the wake of, I surmise not entirely because of the Age Limit fiasco. We have a Parliament that not only debates and disagrees amicably but fights. Ideological differences are settled WWE style in broad daylight, bare knuckle. We are talking of 426 adults of (un) sound mind, parents, priests, mazaz union members with academic papers throwing microphones and ipads at each other!

President Museveni should be the least worried about the mostly fading ensemble. With 293 direct NRM MPs out of the 426, his party can get away with any proposal by swinging a few of the 66 independent votes on the pendulum bob of August frenzy. Why would he want to fix what isn’t broken? In a coincidental twist, his former handler seems to have taken the proposal literally and designed the blue print. So what was it about Former PM Amama Mbabazi recommending to Hon. Speaker Rebecca Kadaga about tabling a roadmap to a two tier Parliament?

By soliloquy, if you thought that Mr. Amama’s embarrassment at the 2016 elections following his fall from Premiership meant that he is an archived piece of the NRM, a party to which he was once the indomitable gladiator; think again my friend. Only if you are a follower of Prophet Elvis Mbonye or were at Zoe fellowship beginning of year would you hear the “breaking news” as a piece off a broken record. The Prophet had elucidated in clear as daylight rhetoric how before end of year, there would be talk of two Parliaments in Uganda. He talked of a Parliament 1 and a Parliament 2. What you have not yet heard reported by the media from what Mr. Future detailed, is that one of the Parliaments is supposed to be made up of cadres, with ideological refresher training.

The Learned Former Attorney General, Member of Parliament, Prime Minister and NRM henchman, proposed that there was a need to harness the experience of seasoned legislators who have since retired. Mr. Amama argued that populist electioneering does not necessarily attract the most competent talent pool. (If you are following the American primaries, you might chew on this a bit more). He thought that it would be helpful for the country’s legislature to tap into the latent resource of retired public figures. He was not shy from admitting that a career in the August house makes most electoral rejects cum retirees’ unemployable.

In short, he thought it wise that tax payers should employ former legislators in their 70’s, 80’s and 90’s and trust them to be the voice of reason on matters of ultimate national importance. I reckon he did not have medical insurance in mind, but we will wait to hear what the proposed package entails.

I refrain from attempting to close the discussion in one post, rather to open it up. Now that my side of the introduction has been milked flappy, let us ponder where we would like to see our legislation go and why. Will we just amend the Constitution or throw it out entirely? What implications does this have for other provisions on how Uganda is governed?